Moving my Server with less than a second downtime

As I’ve written in my previous post, I moved to a new Hetzner Box. This is how I setup my virtual Host and how I moved my server, including all virtual machines, to the new data center with a downtime of a second or less. This setup is only possible if hetzner allows you to move you network via datacenter.

Because fixed IP addresses are expensive wasting two of the eight IPs to have a broadcast network is not an option.

We create virtual Interfaces vif0 to vif7 and configure the routing to which we connect the virtual machines on eth0. We let libvirt call a little script on startup of the virtual machines. To do this we add the configurations to the libvirt/quemu xml config of the VMs with virsh edit virt0:

Setup inside the virtual Machine

Now we configure the network and routing for the virtual machines in /etc/sysconfig/network-scripts/ It should be noted, that the IP address is arbitrary. We need it becouse we cannot add a default route directly to a device, in this case eth0.

Now we want to move the VM to our new server.

The old server, let’s call it Hetzner-Old, is a CentOS 7 with a bridged net/29 network and several virtual machines running on it (e.g. this Blog). The VMs are running on LVMs which themself are running on crypto devices. Each VM has its own LVM group.

Now we add the repo for SIG Virtualisation on both machines.

Next we open a tunnel between the two machines with

This way we have encrytion and don’t have to worry encryting it with TLS on qemu. 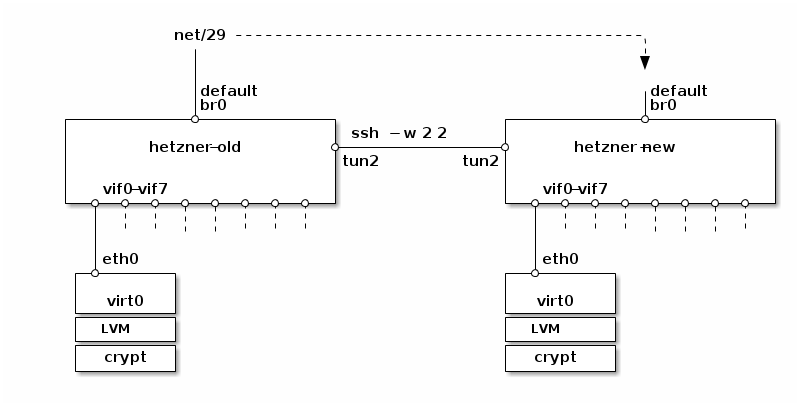 On Hetzner old we have to route through the tunnel tun2

On Hetzner-New we add a new routing table with:

The number 201 is only internally used, therefore arbitrary.

Next we set a rule for every package where fwmark 1 is set use table vm-out:

Finally we wait for Hetzner to swich the net/29 network over to Hetzner-New and throw away the previously set iptables rule. Since the new machine is in a different data center, Hetzner has to allow this moving. Because for this to work the net/29 network has to be in Hetzners core routers. With this command we wait for the first tcp package to arrive at Hetzner-New and flush our iptables rule.

This entry was posted in Fedora and tagged Fedora-Planet. Bookmark the permalink.